In your experience as a traveller, you will no doubt have admired magical placesto ignite your imagination and win your heart. In order to relive the same sensations and feel the emotions that only a few special destinations can give you, there is one thing we absolutely suggest you do: visit Syracuse!

We are talking, in fact, about the only ancient city that gave the great Athens a run for its money, the place Plato identified as the right one to found his Ideal Republic.

A container of culture, mythology, art, tradition e landscapes that will make you fall madly in love with its beauty. We have selected, for you, 5 unmissable stagesa guide of notes and ideas on the best places to visit in Syracuse.

The two bridges that support it and connect it to the mainland give way to a succession of temples and churches that will catapult you into a world of peace.historic and fascinating atmosphere. Ortigia, however, is also the centre of nightlife and events in the city of Arethusa.

Restaurants, bars and clubs, full of life, music and attractions, that will give a touch of exhilaration and freedom to your holiday.

A freshwater spring just a stone's throw from the sea, a mystery that will thrill you with its mythological origins.

It was Artemis, goddess of the hunt and of maidens, who enveloped Arethusa into a cloud and blew her hard towards Sicily, protecting her from the advances of the god Alphaeus. Near the sky of Ortigia, however, the cloud dropped the beautiful nymph and she turned into a spring of fresh water.

The suggestive and strategic location of the spring will also surprise you with a enchanting and breathtaking sea view.

As is often the case when visiting Syracuse, here is another site that will amaze you with its combines the charm of nature with that of legend. A cave that owes its name to Caravaggio, who was struck by the unique ear-cup shape.

The dedication to Dionysus, on the other hand, stems from the legendary talesIt is said, in fact, that the fearsome tyrant of Syracuse exploited the extraordinary acoustic characteristics of this place to intercept the plots of his prisoners. The cave, in fact, enjoys aexceptional acoustics and you will find it surprising how clear and impressive your voice will sound.

Right above the Ear of Dionysius, taking advantage of its fantastic sound propertiesstands the historic Greek Theatre of Syracuse. Built in the 5th century BC, it represents one of the greatest examples of Greek theatre architecture and, above all, it has the advantage of keeping its traditions alive. If you're lucky, you'll be able to come across the performance of plays and tragediesstill offered within this magical context.

Take a breath, there's still history to be breathed. This time thanks to the Sicily's oldest Doric stone temple. Over the centuries, the Temple of Apollo has undergone various transformations: from a Byzantine church, to an Arab mosque, to even becoming a Spanish barracks. Its vision, in fact, exudes indelible emotions and lead your imagination into the many lives and stories it has witnessed.

At the end of this journey through the most beautiful places to visit in Syracuse, the last stop we would like to suggest is an establishment that is worthy of your holiday.

Visit the our site and choose one of the elegant flatslocated just under an hour from Syracuse, signed Ferrini Home.

Planning your next trip to Catania?

Subscribe to the Ferrini Home newsletter and immediately receive our map of Catania, designed to accompany you through the alleys of this wonderful city!

Inside you will find:
The route to follow for a perfect 'cultural walk
The list of must-see sights
Recommended restaurants and venues for street food and aperitifs
Catania's most beautiful neighbourhoods, beaches and surroundings 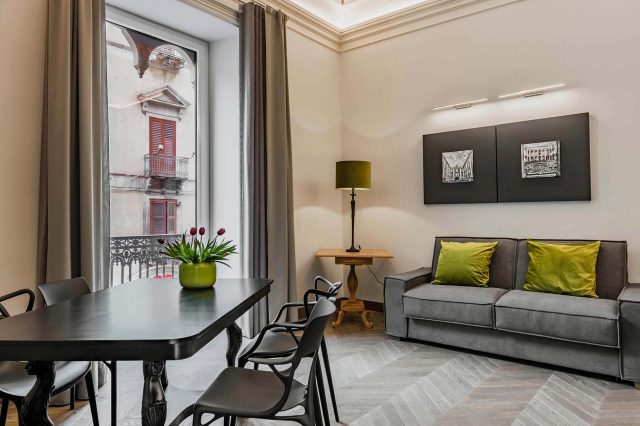 Planning your next trip to Catania?

Subscribe to the Ferrini Home newsletter and receive our map of Catania, designed to accompany you through the alleys of this wonderful city!

Inside you will find: